Software must be parallelized and modified to benefit from new approaches to enhance hardware performance in today’s automotive designs. AUTOSAR’s layered software architecture leverages MCUs to meet the latest demands.

For many decades, software developers benefitted from being able to use the same software code while working with increasingly powerful hardware. As hardware manufacturers regularly improved the performance of their semiconductors by enhancing transistor densities and clock speeds, software development enjoyed a “free ride”—they were able to readily develop on these new devices without having to change software architectures.

However, processing power has hit a wall due to the limit in increasing clock speeds. As a result, chip manufacturers have been turning to dramatically new approaches to achieve further performance gains. First it was hyper-threading and homogeneous architectures, and then heterogeneous multicore architectures. To benefit from these hardware changes, existing software had to be parallelized and modified to deal with the heterogeneity.

Modern microcontrollers (MCUs) and systems-on-a-chip for automotive, such as Infineon’s AURIX 2G or NVIDIA’s Drive Xavier, point to the trend toward homogeneous, and even heterogeneous, multicore hardware architectures. To benefit from these advances in hardware, changes in automotive software are required as well.

A critical enhancement to the AUTOSAR software architecture has been the distribution of the AUTOSAR communication stack over different cores, which is mandatory for realizing the performance benefits of multicore architectures.

As background, in AUTOSAR 4.0.1, support for multicore MCUs was first introduced. In this update, AUTOSAR provided the means to allocate application software components (SWCs) to dedicated cores and facilitated the cross-core communication between those SWCs via the runtime environment (RTE). AUTOSAR basic software (BSW), however, was still allocated to a single core.

At this point in the evolution of AUTOSAR, it became obvious that a monolithic communication stack allocated to a single core would eventually become the performance bottleneck. That’s because the sequential part of the software would continue to impose a theoretical limit on the speeds achieved by a multicore MCU. Hence, it led to the fresh approach of distributing the communication stack over the different cores, which is a necessity for reaping the performance benefit of multiple cores.

When working on communication stack software distribution, it’s important to consider the following to make efficient use of the multicore resources:

With these considerations in mind, we can develop the general distribution strategy for the AUTOSAR communication stack. We split the communication stack into sub-stacks based on the particular network type (i.e., CAN, LIN, FlexRay, and Ethernet) and allow each of these sub-stacks to be allocated to a dedicated core. Thus, any potentially concurrent access to the communication hardware peripherals (i.e., CAN, LIN, FlexRay, and Ethernet controllers) from different cores can be ruled out. In addition, fully independent and parallel execution of the different sub-stacks is possible without interaction among them.

To drive this separation and independence even further, we split the general network-type independent BSW modules of the communication stack (i.e., IpduM and Com) into different parts. Each part is equipped with a dedicated processing function that takes care of processing the subset of the communication originating from, or targeting to, a particular network type. Those dedicated processing functions are then allocated on the dedicated core for the respective network type. 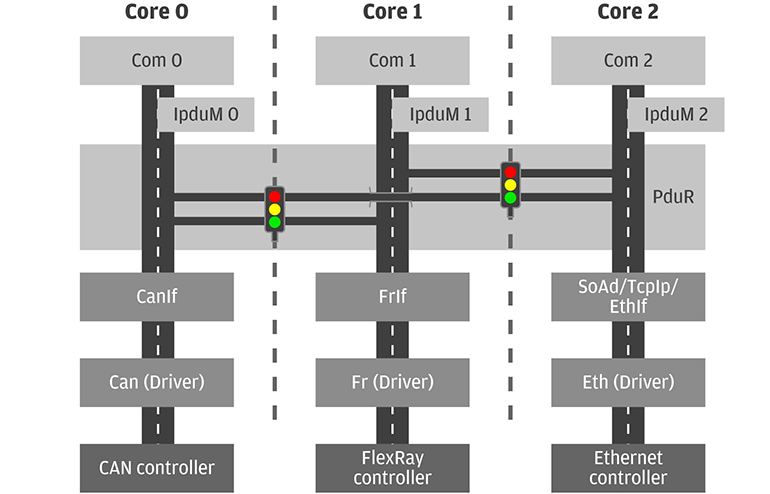 This multicore communication stack architecture is by means of core allocation of the AUTOSAR stack.

The approach described here has been successfully implemented and deployed in two real-life automotive series projects for a major German car manufacturer. The first project dealt with the central gateway electronic control unit (ECU) of a premium vehicle that required a vast amount of data to be routed between different networks and exhibited very complex routing paths. In this setup, an STMicroelectronics Chorus 6M MCU was used, where the CAN, FlexRay, and Ethernet sub-stacks were each allocated to dedicated cores.

The second project dealt with a powertrain domain master ECU exhibiting time-critical event chains involving multiple ECUs and requiring strictly deterministic timing on several CAN networks. In this setup, an Infineon AURIX 2G MCU was used, where the CAN and LIN sub-stacks were allocated on one core and the FlexRay and Ethernet sub-stacks were allocated on another core.

We recommend locating code and data within memory with a strong affinity to the respective core using AUTOSAR’s static memory-mapping functionality to properly use fast core-local memory as well as prevent/reduce conflicts upon access to slower global memory. Implementing this approach and deploying it in two series projects for a major German OEM showed that by means of distributing the communication stack and doing a proper allocation of the application software components, an efficient use of the multiple cores of an AURIX 2G MCU can be achieved. And there’s almost no overhead for inter-core communication and synchronization.