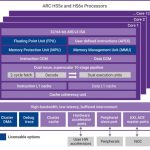 The 32-bit ARC HS5x and 64-bit HS6x processors, available in single-core and multicore versions, are implementations of a new superscalar ARCv3 Instruction Set Architecture (ISA) and deliver up to 8750 DMIPS per core in 16-nm process technologies under typical conditions, making them the highest performance ARC processors to date.

The multicore versions of the new ARC HS processors include an innovative interconnect fabric that links up to 12 cores and supports interfaces for up to 16 hardware accelerators, all while maintaining coherency among the cores.

The processors can be configured for real-time operation or with an advanced memory management unit (MMU) that supports symmetric multiprocessing (SMP) Linux and other high-end operating systems.

To accelerate software development, the ARC HS5x and HS6x processors are supported by the ARC MetaWare Development Toolkit that generates code.

The ARC HS5x and ARC HS6x processors are based on the new ARCv3 ISA that implements a full range of 32-bit and 64-bit instructions. These processors feature a high-speed 10-stage, dual-issue pipeline that offers increased utilization of functional units with a limited increase in power and area.

Multicore versions of both the ARC HS5x and HS6x processors include an advanced high-bandwidth intra-processor interconnect that has been designed to ease development and timing closure with asynchronous clocking and up to 800 GB/s internal aggregate bandwidth.

To further simplify physical design and timing closure in multicore configurations, each core can reside in its own power domain and have an asynchronous clock relationship with the other cores. A new 128-bit vector floating point unit supports F16, F32, and F64 operations with a 2-cycle accumulation latency.

Like all ARC processors, the HS5x and HS6x processors are highly configurable and implement ARC Processor EXtension (APEX) technology that enables the support of custom instructions to meet the unique performance, power, and area requirements of each target application.

The HS5x and HS6x processors are supported by Synopsys’ ARC MetaWare Development Toolkit that includes an advanced C/C++ compiler optimized for the processors’ superscalar architecture, a multicore debugger to debug and profile code and a fast instruction set simulator (ISS) for pre-hardware software development.

Additional hardware and software tools are available from third-party partners, giving developers the flexibility to choose the best and most familiar tools for their design project. 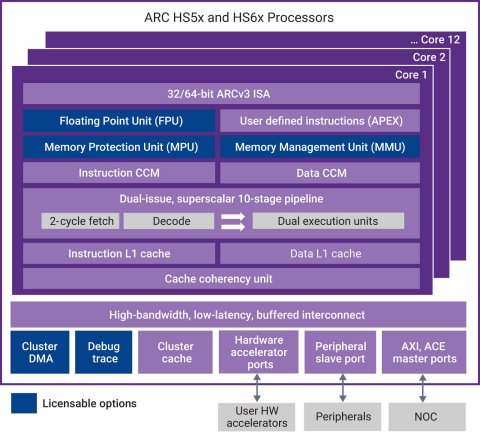