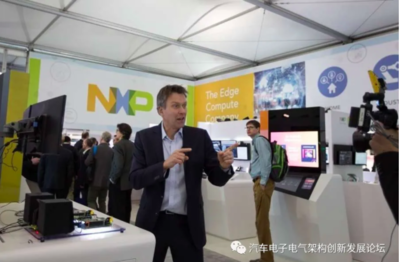 There aren't many chip developers that cover more bases than NXP Semiconductors (NXPI) .

NXP is the world's biggest automotive chip supplier, with a product line that covers everything from infotainment systems and instrument clusters to driver-assistance systems, in-vehicle networking chips and electric car battery management systems. The Dutch firm's silicon is also found within quite a few smartphones, IoT devices, mobile base stations, smart cards and industrial and medical products, among other things.

After falling sharply in 2018 thanks to both a broader chip stock selloff and the unraveling of Qualcomm's (QCOM) $44 billion deal to buy the company, NXP had a much better 2019, with shares rising over 70% as markets rallied and worst-case fears for chip demand proved unfounded. Along the way, NXP inked and closed a $1.76 billion deal to buy Marvell Technology's (MRVL) Wi-Fi/Bluetooth connectivity chip business.

I recently talked with NXP CTO Lars Reger about his company's efforts in a number of end-markets. The talk came ahead of CES, where NXP is unveiling an app processor for IoT/edge computing devices (the i.MX 8M Plus) that has a dedicated AI co-processor, as well as an automotive network processor (the S32G) that supports Gigabit Ethernet connections.

Here's a run-down of notable things that Reger shared during the discussion.

Reger was pretty upbeat about NXP's growth opportunities within the nascent Ultra Wideband chip market. Thanks to its ability to know the precise location of a device it's communicating with, UWB offers a higher level of security than Bluetooth, which in turn is helping drive NXP design wins for keyless entry fobs for cars. And going forward, as UWB radios get built into more smartphones, UWB will also enable smartphone-based keyless entry solutions for cars and buildings.

While Apple (AAPL) placed a proprietary UWB chip ( the U1) within its 2019 iPhones, NXP, already a top supplier of NFC radio chips for phones, sees a large opportunity to supply other OEMs. Reger indicated NXP could leverage the Wi-Fi/Bluetooth IP it obtained from Marvell to offer mobile products housing UWB, NFC and Wi-Fi/Bluetooth radios within the same package, and also noted NXP can differentiate by providing various radios with a common secure element for storing credentials and digital keys. Last September, ahead of the Marvell deal's closing, NXP unveiled an NFC/UWB chipset featuring a common secure element.

An aggressive push by NXP to grow the former Marvell unit's sales could spell tougher competition for some peers. Broadcom (AVGO) and Qualcomm are both major players in the smartphone Wi-Fi/Bluetooth connectivity market, and Cypress Semiconductor (set to be acquired by Infineon) is a top player in the automotive and smart home Wi-Fi/Bluetooth markets.

NXP estimates the market for automotive radar solutions is growing at a roughly 30% clip, thanks to both higher penetration rates for driver-assistance (ADAS) systems featuring radar and the inclusion of more radars per car. The company's offerings in this space include transceivers, MCUs, power management chips and network interface solutions. Reger suggested automotive radar is a major R&D priority for NXP, and noted the company is looking to put a transceiver and an MCU on the same chip.

Chips for battery management systems -- they include products such as MCUs, battery sensors and battery cell controllers -- have also been an automotive growth driver thanks to rising electric car adoption. Reger asserted NXP has seen "enormous design wins" in this space, as automakers looking to maximize battery densities (and with them, electric car range) rely on NXP's silicon to keep batteries working reliably and avoid overcharging.

"We need to make sure our stuff is highly precise, managing every individual [battery] cell, and is functionally safe," Reger said.

The 5G RF Opportunity and NXP's Views on Silicon Carbide

When asked about NXP's large RF amplifier and transistor business for mobile base stations -- a business set to get a boost from 5G network rollouts -- Reger noted that a variety of different RF solutions can be needed, as carriers attempt to optimize a network (or parts of it) for range, bandwidth or latency. He added that there's currently strong interest for high-bandwidth/short-range solutions (i.e., millimeter-wave radios).

Though RF transistor rival Cree  (CREE) thinks 5G presents a major opportunity to drive share gains for its silicon carbide (SiC) transistors relative to traditional gallium nitride (GaN) offerings, thanks to how the technical demands of 5G networks make SiC's thermal properties more valuable, Reger indicated that for now at least, NXP isn't in a rush to roll out SiC offerings of its own. GaN, he insisted, is currently "a pretty good solution for what [NXP wants] to achieve."

For his part, Cree CEO Gregg Lowe forecast  during a recent interview with TheStreet that the adoption rate for SiC within base stations will go above 50% as the market transitions from 4G to 5G.

For both the automotive and IoT markets, Reger talked up the growth potential NXP sees for "crossover" processors that both feature some circuitry that resembles a traditional MCU (power-efficient and very quick to activate, but not especially powerful) and some that resembles a traditional CPU (more powerful, but also more power-hungry and not as quick on the draw). One potential use case given for a crossover processor: An automotive chip whose low-power cores quickly activate a car's rear-view camera, and whose high-power cores kick in and activate a car's navigation system a short while later.

Crossover processor solutions are also a natural fit for powering " digital cockpit" systems that encompass both infotainment systems and digital instrument clusters that replace traditional analog clusters. Here, NXP's crossover processors can physically isolate and guarantee the reliability of mission-critical systems such as an instrument cluster or a head-up display in the event that a less mission-critical system such as an infotainment system crashes, while still allowing all of these systems to be powered by one chip and have their code upgraded via the same over-the-air software update.

Reger noted NXP's i.MX processors have strong design win activity for digital cockpit systems within low-end and mid-range cars, as automakers grow the display real estate within such vehicles. Qualcomm and Nvidia (NVDA) have stronger positions in the high-end car market, thanks in part to the ability of their automotive processor businesses to leverage R&D investments for products such as smartphone and game-console processors.

A few different times during our conversation, Reger highlighted how the enormous breadth of NXP's product line, which includes many different types of MCUs, networking/connectivity chips, analog chips and sensors, can be an important selling point with customers in various end-markets.

"We are the only semiconductor company...that has a broad portfolio to build almost any smart connected device," Reger claimed.