In April 2018, federal regulation mandated that new cars sold in the U.S. must have rearview video cameras. These cameras, specifically designed to help avoid a backup collision, are attached to the rear of a vehicle to aid in backing up, and to alleviate the rear blind spot. In addition to the regulatory requirement, car buyers have come to expect them. As a result, market research firm Yole Développement estimates that 42 million image sensors were shipped for rearview camera applications in 2019 (Source: Imaging for Automotive 2019).

To meet this demand, OmniVision Technologies introduced its 1.3-Mpixel (MP) system-on-chip (SoC), designated OX01E10. It provides automotive designers with what the company claims is “the industry’s best imaging performance for entry-level rearview cameras across a wide range of challenging lighting conditions.”

In a single, quarter-inch optical format package, the OX01E10 integrates a 3-µm image sensor and an image signal processor (ISP). Thanks to this integration, designers need only use one printed circuit board (PCB), reducing the form factor. In addition, the OX01E10 provides low-light capability, two onscreen display overlay layers for driver guidelines, and distortion correction to straighten any curved edges from lenses with a wide viewing angle. 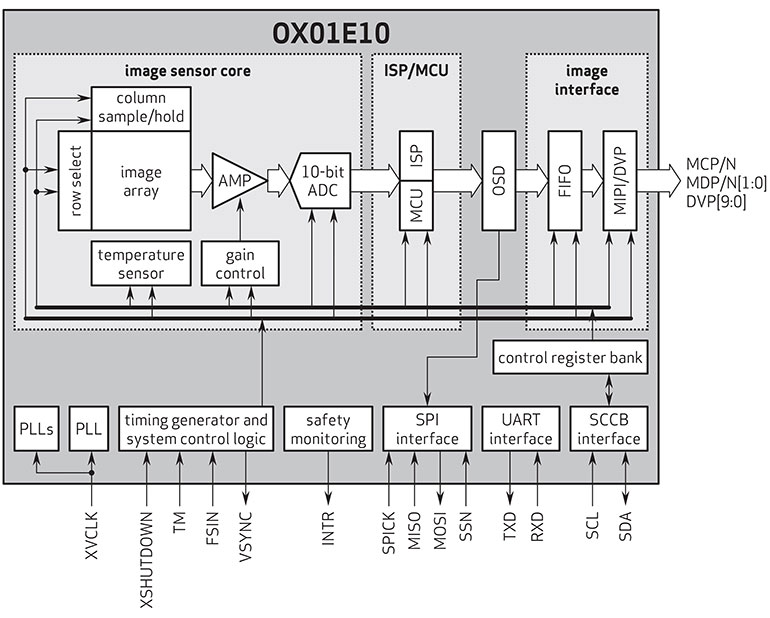 The 1.3-Mpixel SoC integrates both the image sensor and an image signal processor/MCU in a single chip.

The integrated ISP enhances image quality through such features as lens chromatic aberration correction, advanced noise reduction, and local tone mapping. Tone mapping, a technique used in image processing and computer graphics, maps one set of colors to another to approximate the appearance of high-dynamic-range (HDR) images in a medium that might have a more limited dynamic range.

The OX01E10 features power consumption said to be over 35% lower than that of competing solutions (for streaming 1280 × 720 @ 30-fps video, the power requirement is as low as 260 to 270 mW) and significantly reduces temperature. In fact, this is the only imaging device for entry-level rearview cameras that doesn’t require a metal heat sink, allowing for the use of plastic camera module bodies to reduce cost.

With its compact package size, OX01E10 also enables smaller cameras that will fit in much tighter spaces. By integrating both the image sensor and ISP into one chip, designers can save on both cost and space by eliminating the second PCB in typical two-chip implementations.

“Rearview cameras remain the largest volume application in the automotive camera market,” says Andy Hanvey, director of automotive marketing at OmniVision. “The SoC’s functional safety features allow module providers to create a single platform for both the viewing cameras and the machine-vision applications that require ASIL B, while offering pin-to-pin compatibility and design reuse with our OX01F10 SoC for surround view systems (SVS).”

The SoC leverages OmniVision’s dual-conversion gain technology, which helps improve dynamic range by changing the conversion gain based on illumination levels. This, in turn, allows the part to achieve an HDR of 120 dB with only two captures as opposed to the three generally required, minimizing motion artifacts.

OX01E10’s image sensor is built on the OmniVision PureCel Plus pixel architecture, which was developed to improve low-light sensitivity. In low-light conditions, PureCel Plus pixel technology picks up more light by enhancing sensor sensitivity and full-well capacity, which boosts performance with lower noise for better SNR and higher dynamic range.

By way of review, full-well capacity is the largest charge a pixel can hold before saturation, which results in degradation of the signal. An image sensor’s dynamic range is typically defined as the full-well capacity divided by the camera noise and relates to the ability of a camera to record simultaneously very low light signals alongside bright signals. As a result, OmniVision claims the OX01E10 performs better than the competition across challenging lighting conditions, eliminating unnatural halos from LEDs and providing better contrast on bright days.

The part is AEC-Q100 Grade 2 certified. Samples are available now, with mass production expected in Q3 2020.

Previous Item：More Power to You: The Auto’s Electrical Overhaul
Next Item：Media Partners
Share：