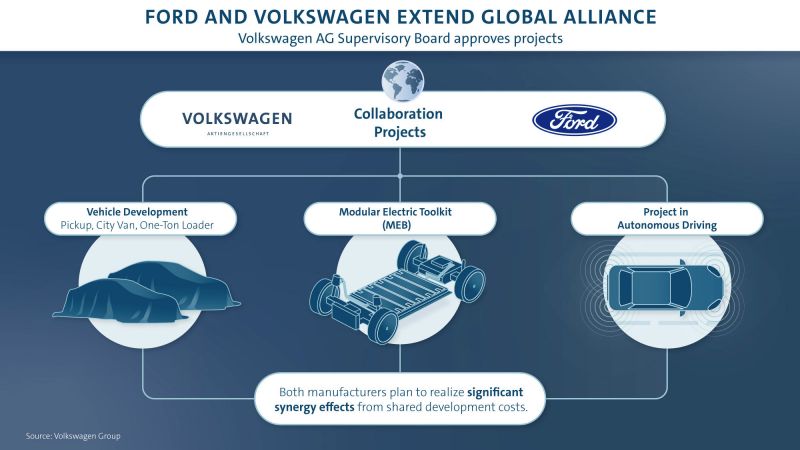 German carmaker Volkswagen AG said on Thursday its supervisory board had approved several projects in a multibillion-dollar alliance with U.S. automaker Ford Motor Co that was first announced last July. The collaboration between the two automakers is one of the biggest partnerships of its kind in the auto industry and will include the sharing of technology to jointly build electric vehicles.

The German carmaker said on Thursday that various contracts between the two companies were nearing completion and would be finalized soon.

Rumors began to surface early last year that Volkswagen and Ford were partnering on an electric pickup and battery-powered commercial delivery vans. Ford was expected to build the truck with VW supplying the electric powertrain. However, both companies would not discuss their actual plans at the time.

Volkswagen´s Modular Electric Toolkit (MEB) will be used by Ford for an electric commercial vehicle in Europe. The automaker's electric vehicle architecture consolidates all of the vehicle's electronic controls and reduces the number of microprocessors.

Regarding official approval of the agreements, a Ford spokesman on Thursday said, "We look forward to jointly providing an update soon."

Volkswagen did say that two additional vehicles will be co-developed, including an electric "city van" built by Volkswagen for urban deliveries and a one ton commericial loader van from Ford.

In 2019, Volkswagen said its was investing $800 million in its Chattanooga, Tennessee assembly plant to build electric vehicles. The plant is VW's first electric car factory in the U.S.

The collaboration also includes further investments in Argo AI, Ford's autonomous driving unit. Ford invested $1 billion investment in Argo in Feb 2017 to jumpstart its own autonomous driving development, back when the startup was a little-known Pittsburgh-based robotics company.

In July 2019, Volkswagen said it will invest $2.6 billion in Argo AI by committing $1 billion in funding and contributing its $1.6 billion Autonomous Intelligent Driving (AID) company, which is tasked with developing self-driving technology for the Volkswagen Group. However, VW is increasing its investment by another $500 million.

VW's planned $3.1 billion investment in Argo "remains on track and is expected to close soon," Argo said in a statement on Thursday.

One the alliance is finalized, Ford and Volkswagen will have an equal stake in Argo AI.