AI Computing for Automotive: The Battle for Autonomy

Artificial Intelligence (AI) is gradually invading our lives through everyday objects like smartphones, smart speakers, and surveillance cameras. The hype around AI has led some players to consider it as a secondary objective, more or less difficult to achieve, rather than as a central tool to achieve the real objective: autonomy. Who are the winners and losers in the race for autonomy? 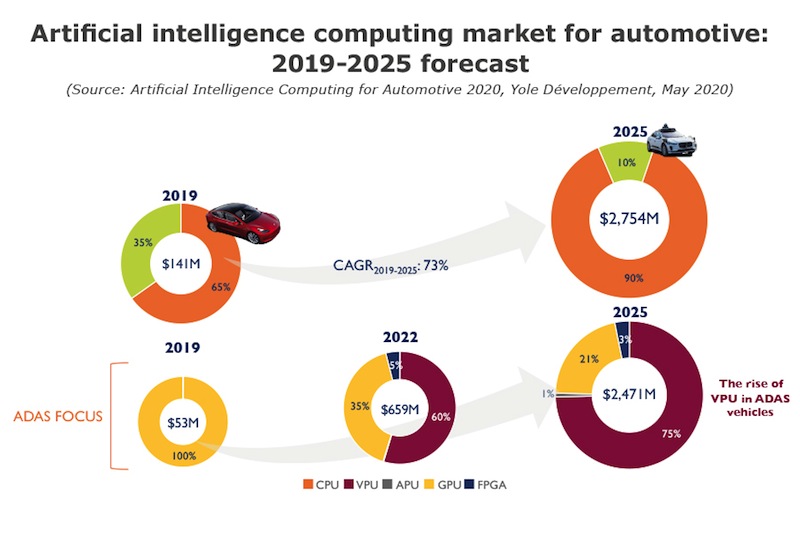 “AI is gradually invading our lives and this will be particularly true in the automotive world” asserts Yohann Tschudi, Technology & Market Analyst, Computing & Software at Yole Développement (Yole). “AI could be the central tool to achieve AD, in the meantime some players are afraid of overinflated hype and do not put AI at the center of their AD strategy”.

The players that have grasped this aspect of the technology battle are already leading the race. The impact of COVID-19 is still uncertain, but Yole’s analysts can already affirm that it will have a profound effect – with autonomy-related research likely to slow down at least this year and next due to cash shortages.

Who are the winners in the race for autonomy?

For a player like Tesla, which has built all of its autonomous stack internally (software and hardware) and thus holds sole ownership, the strategy of moving forward in small steps will pay off since this strategy is not “side research” but rather an integral part of the Tesla project, just like electrification. In fact, the impact of this crisis will probably accentuate Tesla’s market leadership, which is already estimated at several years. In the second line, analysts find OEM s which develop their own autonomous software stack, but with hardware provided to them by other industry players.

Lack of cash can slow down some programs, but others have been active for several years now and will probably not be stopped. And even if they are delayed, autonomy is an integral part of these OEMs’ middle-term strategies – just as it is for Tesla. As for those companies with speculative programs that do not have the quest for autonomy as a cornerstone, it is very likely that these research programs, if they exist, will at best be postponed until the crisis has disappeared completely. These companies will be the big losers in the autonomy race and will have to rely even more on computing players to provide them with full autonomous solutions/functionalities. 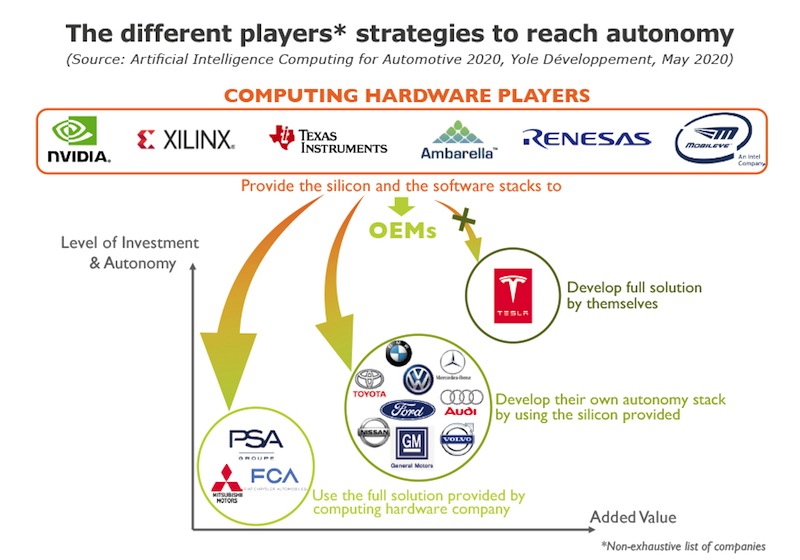 The evolution of the number of functionalities, along with their increased complexity, requires the contribution of dedicated solutions for the software carrying these functionalities. Firstly, in terms of software, it is becoming increasingly difficult to not provide a touch of neural networks. Even if the “black box” aspect of neural networks is less discussed, it can still remain an obstacle to implementation, particularly in the widely accepted “safety first” trend.

Yole focuses largely on the integration of accelerators (or neural engine/neural processing unit – different marketing names for same type of architecture) in ADAS solutions. These units, which have started appearing in mobile phone processors, are dedicated to the calculation of deep learning algorithms – the most famous of which is an AI method used today for object recognition in images. Tesla integrated these accelerators and AI into its Full Self-Driving (FSD) chip last year.

For most OEMs, this solution will be realized by 2021 – 2022, since these special units are now integrated into all current or future ADAS chipsets at Mobileye, Xilinx, TI, Toshiba, Ambarella, and Renesas. This trend to integrate more and more AI and therefore accelerators follows in a linear fashion the rise in autonomy. Other trends such as centralization will gradually redraw the future of computing. 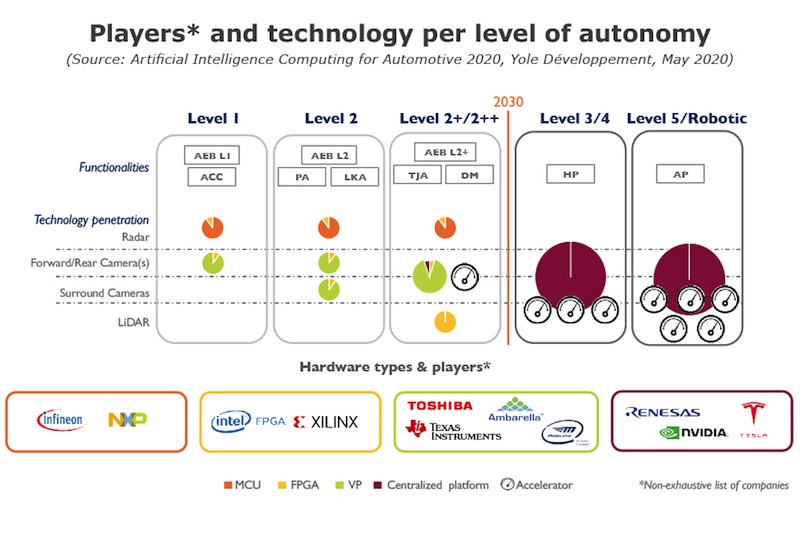 A market divided between centralized platforms and vision processors

As analyzed by Yole’s team in the new Artificial Intelligence Computing for Automotive 2020 report, AI computing dedicated to the automotive market segment is divided between centralized platforms and vision processors.

According Pierrick Boulay, Technology & Market Analyst, Solid-state Lighting at Yole: “We suggest that two paths are available: either a single computer-type NVIDIA or FSD, descending from the high-end segment of robotic vehicles (i.e. the “brain” of a car); or, the number of vision processors incorporating accelerators is multiplied, a path already embraced by several OEMs”.

Competition will arise between these two platforms and determine the revenue. The 2025 market for AI, including ADAS and robotic vehicles, is estimated at US$2.75 billion – of which US$2.5 billion will be “ADAS only”, explains the market research and strategy consulting company, in its new technology & market report.

Yole collaborates with its partner System Plus Consulting to investigate all disruptive technologies related to ADAS applications. Under this context, System Plus Consulting has been recently interviewed by Junko Yoshida, EE Times about innovations related to Audi A8. A part of this interview details technology advances led by NVIDIA in this domain.

Romain Fraux, CEO of System Plus Consulting explains: “…The processors that make up the platform are NVIDIA Tegra K1 used for traffic signal recognition, pedestrian detection, collision warning, light detection, and lane recognition. Tegra K1 with eight layers of PCBs integrates 192 Cuda cores, the same amount that NVIDIA integrates into a single SMX module inside the Kepler GPUs currently on the market with DirectX 11 and OpenGL 4.4 support.…”. 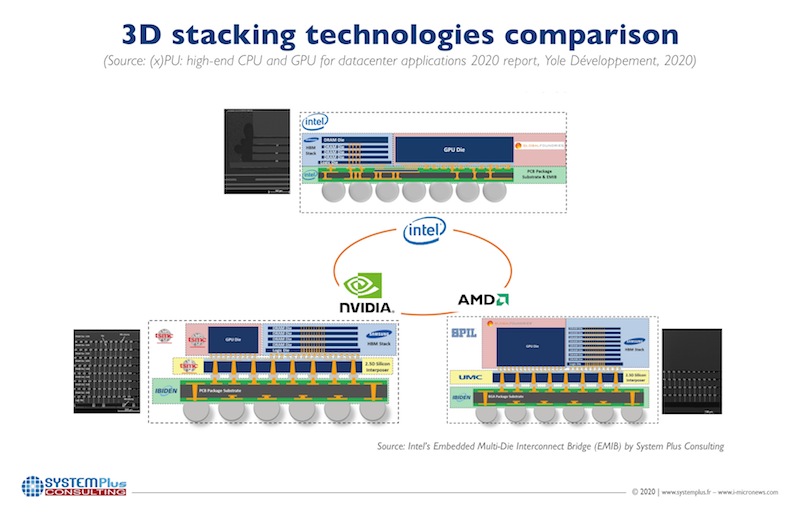 “This is only the beginning, and the challenges surrounding AI and its impact on the automotive industry are already being felt,” comments Yohann Tschudi from Yole. Some companies have a considerable lead, and it will be difficult to catch up with them, especially without integrating AI and the computing that goes with it.