【Summary】Volvo's electric vehicle brand Polestar shared new details this week about the Precept electric sedan, a car that might rival the likes of the Tesla Model S, Porsche Taycan and BMW i4 electric sedan. The Precept signifies an important milestone for Polestar as a standalone electric brand. 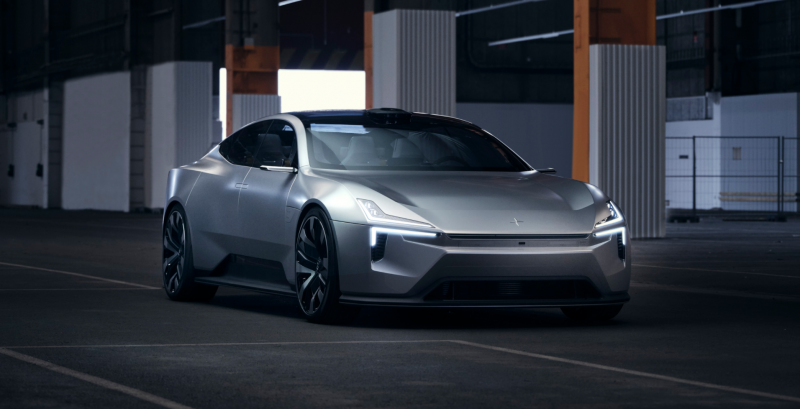 Now that Tesla has become a formidable force in the auto industry, the company has opened the doors for legacy automakers and new electric vehicle startups to design and deliver their own electric models to try and match some of the success of the pioneering electric carmaker.

Polestar shared new details this week about the Precept electric sedan, a car that might rival the likes of the Tesla Model S, Porsche Taycan and BMW i4 electric sedan.

The Precept was created to showcase three key areas for the Swedish brand, which include sustainability, digital technology and cutting edge design. The car signifies an important milestone for Polestar as a standalone electric brand.

The Polestar brand officially launched in 2017 with the Polestar 1, a limited production electric Performance Hybrid GT supercar with 609 horsepower and an all-electric range of 77 miles, the longest of any hybrid car in the world.

In 2019, the Polestar 2 was revealed as the company's first fully-electric, higher volume premium car that's positioned to rival the Tesla Model 3. In the future, Polestar 3 will join the portfolio as a fully electric performance SUV.

Although the Precept is not available to purchase at this time, the electric car is meant to showcase the innovative and technologically advanced vehicles that Polestar plans to produce in the future, which will come to define the brand.

"People ask me all the time, ‘what is the future of Polestar?', and of course we are not showing our future models just yet," said Polestar CEO Thomas Ingenlath. "But Precept shows you where we will be heading – our design direction, our ambitions about sustainability and the great digital user experience we will bring with those future cars. Precept showcases our future, not as a fancy dream or something out of a sci-fi movie. This is our reality, to come." 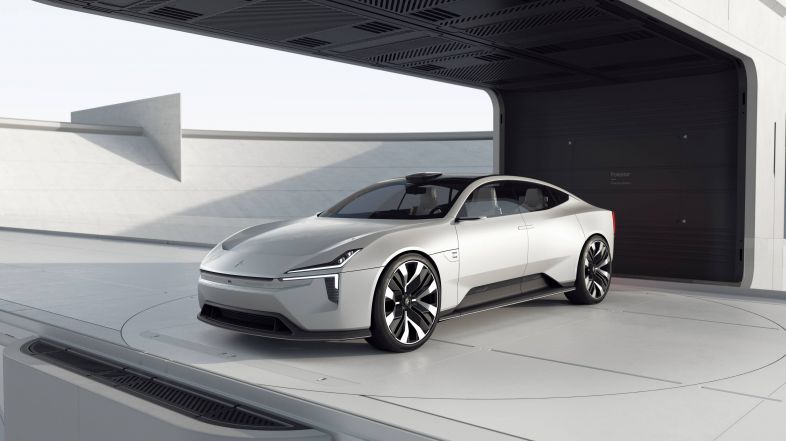 One thing that stands out right away is the overall design of the Precept. Polestar's design language includes the Precept's aggressive stance combined with aerodynamic efficiency.

Among the vehicle features is a "front wing", integrated into the hood that improves air flow by reducing turbulence over the rest of the body. The wing reduces aerodynamic drag, which results in increased electric range. Flush door handles remove additional air flow disturbances. The side view mirrors have been replaced with cameras mounted in aerodynamic housings. The cameras feed the signal to digital screens inside the cabin.

The front of the Precept also includes air ducts behind the front wheels, allowing air to exit the wheelhouses which reduces airflow turbulence along the sides of the vehicle. There are air  ducts at the back wheels as well, located in front and at the rear of the tires. The rear air ducts contribute to brake cooling as well as reducing the air pressure created by turbulence inside of the wheel well.

At the front of the Precept, a "SmartZone" replaces the traditional front grille. The SmartZone conceals sensors for future autonomous driving capabilities. Behind it are long- and mid-range radar units, ultrasonic sensors and a high-definition wide-angle camera. Additional SmartZones on either side of the car house more advanced driving assistant sensors.

Other features include LED side markers on the C-pillars which indicate charging status while the Precept is plugged in for charging.

The Precept sports a long wheelbase that accommodates a larger battery pack which is located beneath the floor, freeing up valuable cabin space for passengers. In addition, the rear doors are rear-hinged, opening wider to make it easier for passengers to get in and out.

Rear legroom was given high priority by the Polestar's designers and closely matches that of larger luxury touring sedans such as the Mercedes S Class and BMW 7-Series sedans. 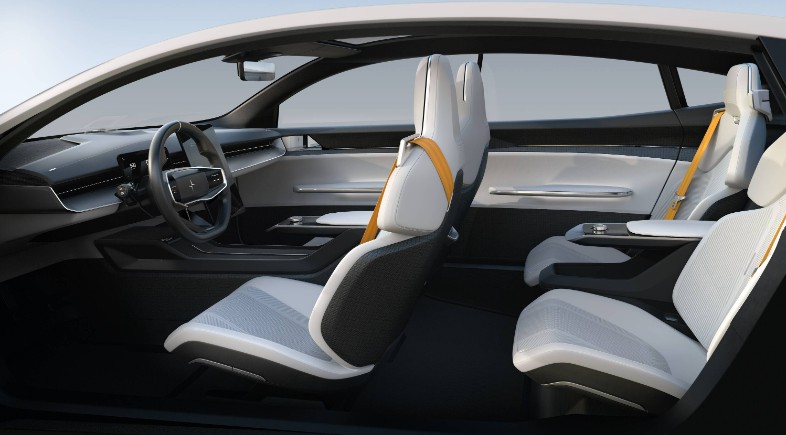 Polestar is one of the first automakers to use Google's new Android Automotive infotainment software. Polestar's vehicles can run all of the popular Google apps, including Maps, Play and Assistant without having to sync a smartphone. The built-in Google Assistant includes advanced speech technology in more languages with better local dialect interpretation, which is important since Polestar will offer its electric vehicles worldwide.

Google Maps and the vehicle's ADAS (Advanced Driver Assistance System) are merged together in one combined graphic in the driver display, providing more accurate predictions based on traffic conditions, Polestar says.

The Precept also includes a 15-inch digital interface that recognizes the driver as they approach the vehicle using Polestar's Digital Key. Once a driver is identified, all of their personalized vehicle settings are adjusted automatically, including with settings and personal content which are securely authenticated from the Digital Key.

Another feature is that video streaming services will be made available via the touchscreen display whenever the Precept is parked or charging to keep occupants entertained. A similar feature is offered by Tesla.

Polestar also added proximity sensors to adjust what is shown on the display screen depending on where the user's hand is placed. Display brightness and screen content adjusts according to movements and the need for more or less information depending on what the user is doing. 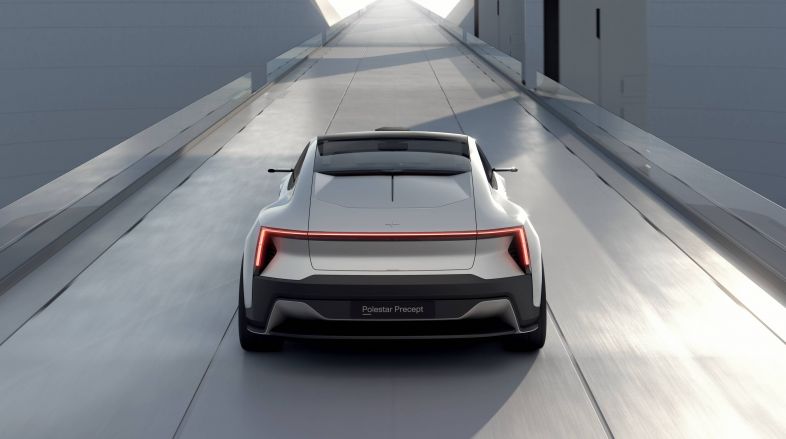 Being a fully-electric and zero emissions car, Polestar is purposely building the Precept using unique materials to replace traditional plastics. The interior of the Precept will feature a significant amount of recycled content.

Polestar said it worked together with Bcomp, an interior supplier and maker of sustainable composite materials. Bcomp is a "natural fibre composite innovator" which has been producing sustainable materials since 2011. The company developed a flax-based natural composite, which has been used extensively to replace many components that are traditionally made from plastics.

The composite materials also help to reduce weight. Polestar says it reduces the interior component weight by 50% with an 80% reduction in the use of virgin plastic.

Even the seat covers are made with 100% recycled PET bottles. The recycled plastic bottles are also used for other surface materials in the cabin. The carpets for example are made with Nylon 6, a material recovered from discarded fishing nets.

For more rigid surfaces such as the seat bolsters and head rests, Polestar is using waste and recycled cork from the wine industry which is used to make cork-based vinyl.

The details about the Polestar Precept were scheduled to be revealed at this year's Geneva auto show originally scheduled in March. However, the recent coronavirus pandemic led to the cancellation of the event.

Polestar said that the Precept is not just another concept car, rather the company calls it a "commitment car" and it offers a glimpse of the type of vehicles Polestar plans to offer in the future.

Originally hailing from New Jersey, Eric is a automotive & technology reporter covering the high-tech industry here in Silicon Valley. He has over 15 years of automotive experience and a bachelors degree in computer science. These skills, combined with technical writing and news reporting, allows him to fully understand and identify new and innovative technologies in the auto industry and beyond. He has worked at Uber on self-driving cars and as a technical writer, helping people to understand and work with technology.