Electrical systems are being re-architected from the ground up.

The electronic takeover can be measured by the percentage that electronic components make up of the overall cost of the automobile, which is expected to rise to as high as 50% by 2030, according to Statista. There are hundreds of CPUs scattered around the vehicle, and as the number of electrical components grows, so has the voltage — as well as the number of voltage domains.

Power analysis at the board level is commonplace, and each ECU can be verified accordingly. But attention must move from the board level to the system level, and cars are becoming sophisticated electronic systems. Whole new architectures are being devised to handle the increasingly complex set of power needs while maximizing the driving range available on all-electric vehicles.

New look for autos and automakersTraditional legacy automotive OEMs were the first to attempt electric vehicles (EVs). Doug Burcicki, director of IESD automotive market development at Mentor, a Siemens Business, noted that first-generation EVs largely stayed with the old automotive architectures, bolting in electrical components as best they could, without optimizing any of it. Newer players like Tesla have started with the expectation that they would be all electrical, so they’ve strategically designed their systems from the top down, giving them a long-term advantage. While older OEMs are catching up, they still tend to operate in various silos rather than integrating mechanical and electrical disciplines across vehicle brands and classes.

For future designs, both old and new auto makers are redefining the automotive architecture, including the way electrical power is handled internally. There will be multiple voltages, some of them far higher than anything seen in traditional internal-combustion cars. “As the voltages increase, you get higher currents, which means higher IR drop,” said Ken Willis, product engineering architect for signal integrity at Cadence.

As described by Burcicki, the two major voltage domains are: 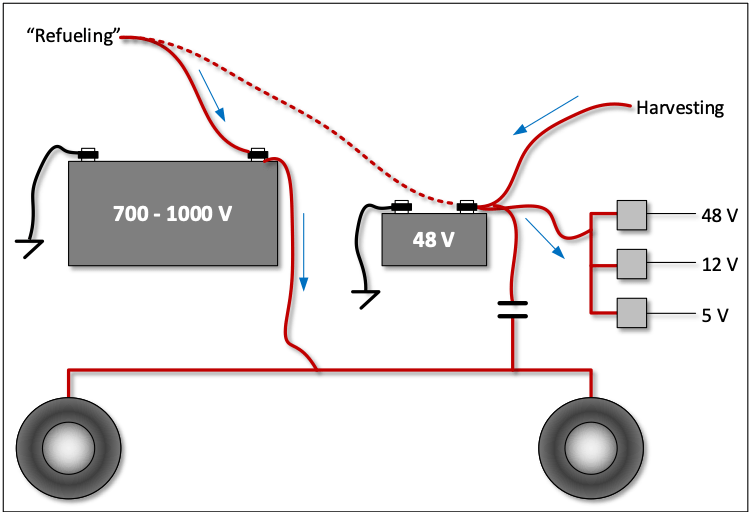 Fig. 1: A simplified example of two major voltage domains, with the high voltages powering the drivetrain and the lower voltages powering other electronic systems in the car, as well as supercapacitors that can assist the drivetrain. Where ECUs draw their power may vary by architecture. Source: Bryon Moyer/Semiconductor Engineering

The power architecture also is moving to multiple zones within the vehicle. This can provide for better isolation, so if there’s a problem with one zone it doesn’t necessarily affect the others. It also helps to reduce wiring, since wiring harnesses today may weigh as much as 300 pounds, according to Burcicki.

Centralized ECUs also may be distributed to provide better fail-safe operation and to further reduce wiring. While that might be natural for some ECUs, it creates a challenge for ECUs that currently manage units distributed around the car, like cameras and antennas.

Fusing all the dataCameras and antennas are appearing on many or all sides of vehicles. They are managed by central ECUs, which then distribute or collect data from the various units. Taking cameras as an example, multiple images must be gathered from all the cameras to be fused into a single image or into some other format that provides quick, clear, unified information for a driver or an autonomy system.

This creates a second tier of power distribution because the ECU receives power and then redistributes it out to the different cameras. The cables running from the ECU to the cameras could be damaged somehow, potentially bringing down all of the cameras in the vehicle. “Right now, if a 10V supply covers eight cameras, then if one of them shorts, it kills all eight,” said Chintan Parikh, director of Maxim Integrated’s Automotive Unit.

Maxim Integrated’s approach to this involves an ASIL-B-D camera power protection unit that isolates each camera power cable. “With isolation, only one is disabled,” he said. The device checks whether the cable power is shorted to the battery, shorted to ground, or carrying too much current, and it shuts down the unit with the issue. If one goes down, the others remain active. “One can even do retries if power kicks out,” he said, to confirm whether it was just a transient issue. Fig. 2: Power to cameras (and other similarly distributed components) is delivered first to the central camera ECU, and from there to individual cameras. An additional device can be used to isolate the power from the different cameras. Source: Bryon Moyer/Semiconductor Engineering

But what happens if this ECU is distributed, with each zone of the car having its own ECU for local cameras? The camera power isolation can happen locally within their respective zones, but fusing all of the images into a single image still requires a centralized ECU for that.

Burcicki suggested that the fusion element, which is one of the bigger challenges being worked on, could be simplified if auto makers moved to event-based cameras – so-called dynamic vision sensors (DVSs). Most fields of view don’t change quickly, so the computing burden can be greatly reduced using cameras that report only events that represent changes, rather than reprising the entire field of view for every frame.

The situation is even more pronounced in autonomous geo-fenced vehicles. These drive a limited route over and over, so the scenery rarely changes significantly. What such a system wants to focus on are unusual changes, such as a pedestrian in the way or a dog running across the street. Those constitute deviations from the customary view, and they require action. By focusing the image processing only on those unusual elements that will affect significant vehicle decisions, the processing burden is reduced. This can shrink the scope of a central ECU, increasing the viability of a distributed architecture that routes the local pieces to a central ECU for fusion.

Designing and Verifying the Power SystemWhile traditional automotive practices have resulted in limited commonality between brands and classes of vehicle, a few makers have gone so far as to create a new platform onto which an electric vehicle can be built. Referred to as a “skateboard” chassis, it starts to regularize elements like the powertrain and wheels, which can then be worked into the electrical and power architectures.

Fig 3: A skateboard chassis made by Rivian. Source: Rivian

Burcicki cautioned, however, that “startups on the West Coast think mechanical is simple, and they focus on electrical and software. But it’s the other way around. The mechanical isn’t science. It’s an art.”

Traditional OEMs may still be organizationally siloed between electrical and mechanical, which is a potential issue, but their mechanical experience is valuable. That said, an appropriate balance is needed. “Mechanical parts don’t do anything if not electrified,” he said.

As described by Willis, subsystem design and verification involve data cobbled together from various point tools used for different aspects of the design. Some of that data is empirical, derived from test builds. This methodology can be difficult when the design deadline nears, since manufacturing is lined up to build cars, and there’s not a lot of time to iterate the design.

Cadence’s Willis said that automotive design needs to move from the board level, where individual ECU verification has focused, onto the higher system level. He sees three levels of power analysis that need to be performed. The first comes before any boards have been laid out. How many connectors will there be? How long will the cables be? What will the IR-drop budgets be for each portion of the vehicle?

The second comes during design. At this point, each designer knows their own power and IR-drop budget, giving them a solid verification target. The third phase comes at the sign-off stage, when the whole system is pulled together. Willis further noted that components need to be verified across voltage and temperature conditions and must pass with margin to spare.

The challenge here is that tools must be able to address the overall vehicle PDN. Because verification has focused on boards up until now, those tools have been electrical board-level tools. “If you look at system design in general, it’s evolved beyond board-level,” said Willis. “This is a rolling mobile system.” Extending the scope of tools beyond just the board brings the need for tools and methodologies that operate at the system level. Because the system consists of multiple boards interconnected by cables, the verification tools must have both mechanical and electrical notions.

Burcicki said that in these situations it’s the mechanical tools that remain in control, with electrical information being imported into the mix. This co-simulation is becoming more common, but it’s taking time. The result of all of these challenges is that automotive power systems are receiving increased design and verification focus.

“Power is one of the things that’s overlooked a lot,” said Willis. “It’s like the foundation of a house. You have to get it right or you’ll pay for it later.”

Bryon Moyer is a technology editor at Semiconductor Engineering. He has been involved in the electronics industry for more than 35 years. The first 25 were as an engineer and marketer at all levels of management, working for MMI, AMD, Cypress, Altera, Actel, Teja Technologies, and Vector Fabrics. His industry focus was on PLDs/FPGAs, EDA, multicore processing, networking, and software analysis. He has been an editor and freelance ghostwriter for more than 12 years, having previously written for EE Journal. His editorial coverage has included AI, security, MEMS and sensors, IoT, and semiconductor processing to his portfolio. His technical interests are broad, and he finds particular satisfaction in drawing useful parallels between seemingly unrelated fields. He has a BSEE from UC Berkeley and an MSEE from Santa Clara University. Away from work, Bryon enjoys music, photography, travel, cooking, hiking, and languages.